Cinque Terra, translated “five lands”, is a group of villages built into the cliffs along the Mediterranean coastline in northern Italy.  While it is quickly growing in popularity, it is still relatively untouched by tourists, which makes it even more appealing.

We were staying in the easternmost village of Riomaggiore, which basically consists of one main street, starting near the sea, and going straight up into the mountain.  That made carrying luggage up to our apartment super fun!  We spent the afternoon exploring & hanging out on a rocky beach, which makes for a beautiful cove, but not so much for comfortable lounging. 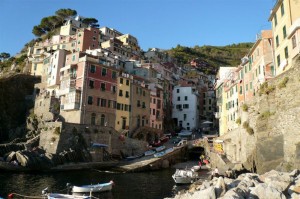 That night Lance, Rachael, Thomas & Kaitlin all arrived, so we cooked dinner together in the apartment we were sharing with the Gertz’.  We wanted to tour all 5 of the villages, so the next morning we took a ferry to the furthest village, Monterosso al Mare, then took the entire day to work our way back..

We had heard about a “secret beach” called Guvano Beach, beneath Corniglia, the village in the center, and decided that would be a good meeting place for later in the afternoon.  Thomas & Kaitlin hiked there, and we took the train with Lance & Rachael.  Rachel’s book said there were two ways to get to this secret beach (although the fact that it’s printed in Frommer’s kind of spoils the secret): 1) a treacherous climb down the mountain, or 2) walk a mile through an abandoned train tunnel.  For some reason, we chose the latter.