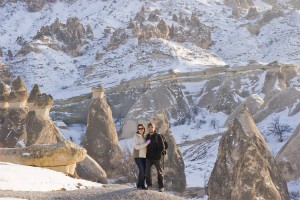 Cappadocia was one of the most interesting, actually surreal, places we have ever been. The story begins with the tale of our first overnight bus. We have done overnight planes and trains before, so we pretty much knew what we were in for. However, what we didn’t count on was being smushed into the very last row of a bus that was 100% full, and felt about 100 degrees.

Scott had the very center seat, meaning there was nothing in front of him except the aisle way (at least until 2am, when more people got on the bus than off, so a little boy had to sit on the floor in front of Scott’s feet). Then there was one couple on Scott’s right, me to his left, and another lucky person shoved into the corner on the other side of me. We were all feeling a little cramped, and to make matters worse, Scott’s seat would not recline, so we were in for a long night.

I got a little sleep in-between the frequent stops, in which I always got out to use the bathroom because I never knew when my next chance would be. (ok, a quick note about that… we were now on the Asian side of Turkey, and the bathrooms were a clear reflection that this was more “foreign” than any place we had yet visited. A hole in the ground, a bucket, a water spout, no toilet paper, no paper towels. Yet they charged you .50 YTL (about .40 cents) to use it.)

Meanwhile, Scott was sitting straight up, miserably hot & uncomfortable. There was a man with his 3 sons sitting in the row in front of us, and you could tell they felt bad for us. They spoke no English (except one son who could say “What is your name?”), yet they kept trying to help us. The father always had something to say (in Turkish), and I’m certain it was all for our benefit, although we only caught about ½ of it. He tried to talk us into moving over and giving someone else the seat in the middle, but Scott did not want to curse anyone else with that atrocity.

So, the father continued to care for us as if we were his own… He must’ve given us 10 pieces of candy, which we could not refuse. We had heard it’s impolite to not accept when a Turkish person offers you something, but the fact is, it’s actually impossible. After a few pieces of candy we tried to politely decline, but inevitably ended up stuffing extra candy in our pockets. He later bought us a giant pretzel, instructed us to stretch our legs out, use pillows, and various other suggestions that we couldn’t understand.

They were a great family and we enjoyed trying to communicate with them. Then, around 4:30 in the morning, after being asked “What is your name?” a few more times, one of the boys in front of us leaned over and showed Scott how to recline his seat! If only he had done that 8 hours earlier!!! So, we were able to get a couple hours sleep before arriving in Cappadocia. But thankfully the unpleasant journey was not at all an indication of what was to come.

Cappadocia is known for its extensive underground cities, caves and “fairy chimneys”. Everywhere you look, these chimneys emerge from the ground, having been molded by a combination volcanoes, natural elements and people. Even our hotel was in a cave… with wi-fi! That’s when Scott knew we were in a special place. 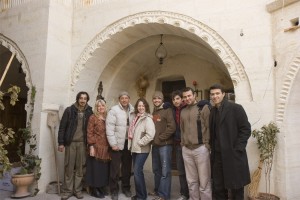 Faruk, the owner of our cave hotel,Kismet Cave House, was one of the nicest, most hospitable people we have met. The only other guests in the 8-room hotel were his 2 nephews and one of their friends, as well as another lady from Australia. So, Faruk piled us all into his van and took us site seeing. Over the next few days, we ate meals together, sipped Turkish tea together, and hung out for hours just chatting. We felt like one of the family.

We were grateful for their help, as we quickly realized that it was very difficult to see Cappadocia on your own. You could rent a car, but even then it would be difficult to efficiently navigate to the various places of interest, which were quite spread out. However, with a combination of Faruk’s guidance and one day-tour, we were able to see some amazing things.

The “fairy chimneys” I mentioned were formed from volcanic ash, and the inhabitants of the area at that time carved homes and churches out of them. Over time, the softer minerals have worn away, giving the caves their whimsical shapes.

The Christians were actually one of the first groups to create and make use of the caves (although the area has since been inhabited by several cultures before becoming a part of what we now know as Turkey). They would hide in the caves and hundreds of underground cities while under persecution during the Roman invasion. There are literally hundreds of cave churches, dozens of which we visited, where they could worship in safety.

One of the most impressive sites we visited was the Selime Monastary, which some of you might recognize from Star Wars. Because of the erosion, entrances that used to be at ground level are now up high, which I think makes the experience even more spectacular. From down below, you would never believe what you were about to see. Kitchens, school rooms, and chapels, pigeon holes, all dug out of caves. 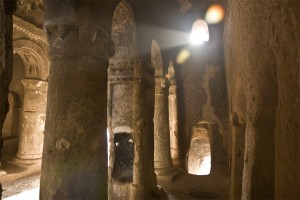 Scott & I were the first ones from our group to enter the largest cathedral in the monastery. There were huge pillars and frescos, and a light shining in from the windows above, beaming down onto the altar. We felt like we were in Indiana Jones, almost expecting the Holy Grail to be positioned perfectly on the altar waiting for us to be the first to discover it.

We were able to do a lot of hiking and exploring throughout our time there (above ground, below ground, in valleys and caves), and we were endlessly amazed. We also did a hot air balloon ride, which is a very popular thing to do in this area. The balloons actually go down into the valleys amongst the fairy chimneys. Watching the sunrise as we floated amongst the hundreds of snow-covered formations will be an experience we will never forget.

Honestly, I wasn’t sure what to expect, especially being only 400 miles from Iraq. It was somewhat of another world, but in a very good way. It was peaceful and the people were wonderful; it felt both civilized and imaginary.

If you ever find yourself anywhere near Turkey, it’s worth the painful bus ride to veer off to Cappadocia.