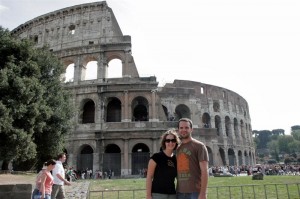 Rome is quite different from the other cities we visited, mainly because it is much larger, so you get everything that goes along with a big city.  If we were to compare it to a U.S. city, it would be Los Angeles – loads of attractions, entertainment & culture, but spread out amongst greater distances with some “less desirable” areas in-between.

As it turns out, our Bed & Breakfast happened to be one of those less desirables!  Upon check-in, we were informed that “a toilet was broken” (aka, he overbooked), so we were being moved to a neighboring B&B.  What’s funny is that I had actually seen our new B&B online and consciously decided that I did not want to stay there… and there we were.

It was actually very clean & had all the basics that we needed, so I don’t want to make it out to be a nightmare.  There was mainly just one thing that annoyed me, and that was the owner, Marco.

On the website for this B&B, where most owners would post photos of their rooms & facilities, Marco posted a photo of himself.  He seemed to be quite impressed with himself and his guest houses, to the point where he seemed to believe it was our honor to stay in his place.