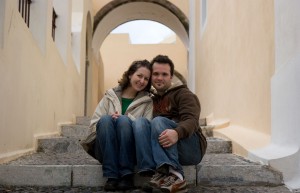 Thanks to that 5:55am flight from Athens, we made it to Santorini before the sun.  Luckily our hotel let us check in early, so we were able to take a morning nap before heading out for the day.

We knew that February was not the best time of year to visit Santorini, and we were expecting some things to be closed.  March or April certainly would’ve been the ideal time for this trip, as it still beats the high season, but you’re likely to have a little more life on the island.  However, with the amount of traveling we want to do in the next 8 months, something had to come first, and we figured Greek Islands in February would be better than Poland in February! 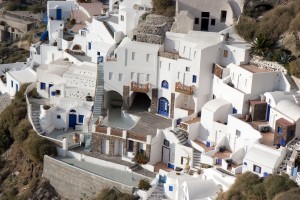 So there we were.  I know there were other people in our hotel, but I don’t know who they are or where they went during the day, because we underestimated how much would be closed.  I had actually asked a few questions of the hotel before we booked this trip, but certainly not wanting to discourage any amount of tourism in their low season, I think some details were not fully disclosed.

Apparently a lot of Santorini’s business owners don’t actually live on the island, so they go home for the winters & return during peak season.  And while it’s true that there is a bus stop just a few meters from the hotel, upon arrival we learned that those buses are few and far between at this time of year.

No problem, we’ll walk to Fira (the largest town on the island) in the rain.  We’re young, waterproof, and it’s only 10 minutes to find some open shops & cafes.  We had also read about hiking down to the port then riding a mule back up, and thought that sounded like an adventure.  We found the mules, but apparently they take winter jobs carrying concrete, not people (as the off season is when most hotels & restaurants undergo renovations to prepare for the crowds in the summer). 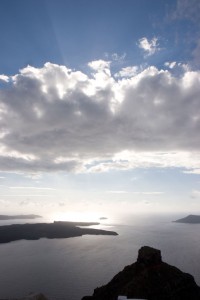 Despite 90% of Fira being closed, we still enjoyed a couple hours wandering the streets and admiring the Volcano, whose enormous eruption a few thousand years ago turned one island into a caldera.  Looking out into the lagoon, you can visualize the shape of the island before the eruption.  Santorini is now somewhat of a ½-moon shape, the island ofTherasia once completed the cirlcle, and the center of the volcano rises up from the lagoon that now separates the two islands.  The view was breathtaking, and the rain had subsided, so we just took it in for a bit.

One thing we’ve noticed about Greece is that there are dogs everywhere, some with collars and some without.  Most of the time you see them napping in the sun, or just running around like they know where they’re going.  Being dog lovers, we find ourselves making up stories about them, where they’re from, what they’re thinking, or where they’re going.

We got to where we recognized a few dogs in Athens, which we determined to be “locals.”  Santorini was no different, except for one, which I named Scout for his keen senses and determination.  Scout is mostly Beagle, although purebreds don’t seem to exist here.  But one thing I know about Scout is that he can smell.  He started following us… he’d lag behind, then run ahead, but never veer too far.  After about a mile, we started to fear that we were leading him too far from “his territory”, so Scott tried shooing him away.  I wanted to give him a piece of salami as a parting gift, but Scott wouldn’t let me. 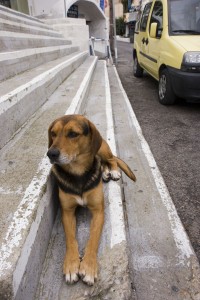 We thought he finally went his own way, so we continued walking for a bit, then stopped in a grocery store to prepare for a hotel room picnic.  After about 15 minutes we exited the store to find that Scout had tracked us down and was waiting for us outside the door.  He continued to follow us home and hang out outside our hotel for the day.  The next day we met Gilligan, the shaggy mut.  Scott insisted that I quit naming all the dogs, but after they spend an hour or two following you around, I think it’s ok to be on a first name basis.  Plus there were not many people to talk to, so Scout & Gilligan were the best companions around.  Ok, enough dog stories.

So the drizzly weather we had when we first arrived in Santorini quickly vanished, and the rest of the trip was nothing but blue skies & sunshine.  We rented a car one day and drove around the entire island, which was great.  We saw black beaches, red beaches, tiny villages, dozens of churches, and ended our day in Oia, at the northern tip of the island, which is reputed to have the best sunsets in the world. 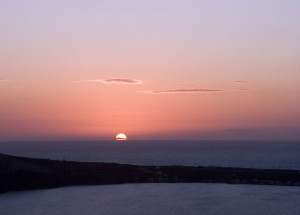 We perched ourselves on a patio over the Oia Castle, along with about 20 other sunset seekers.  While I can’t necessarily say that it was the most beautiful sunset I’ve ever seen, I don’t think there’s a such thing as a bad one!  With the beautiful city behind you and the view of the volcano and islands off in the distance, we fully enjoyed the entire experience, and plan to return again… but next time it will be between the months of March & October!  That being said, at the price of $36/night for a hotel by the sea, I can say we definitely got our money’s worth, mule ride or not.